Note: This article is the first in a series that’s entitled C-Suite Consejos. The C-Suite Consejos series will offer executives a series of market-specific insights to help them strengthen their LatAm strategies, all based on John’s experience in advising corporate leaders about Latin America over the course of the past 25 years.

2018 marks the 25th year that I have been studying Latin American markets and advising clients on how to succeed in this always promising, frequently challenging region. Almost 3,000 client projects later, there are many scars and hopefully a bit of wisdom to show for the effort. Wisdom, I have learned, is built more readily on mistakes and failure than it is upon success because the former is what provokes reflection and improvement, not the latter. When you spend a career watching companies struggle in a volatile region like Latin America, there are plenty of worst practices to learn from along with a few best ones. So, now I have decided to put some of the most universal lessons learned to paper in the hopes that they may prove a useful reference to those of us who have bet our futures on Latin America.

From a Crystal Ball to Chronic Capital Shortage

In Q1, 2009, at the height of the US originated global financial crisis, I was asked to address a roundtable of CFOs of some of the largest US manufacturers including global leaders in the automotive, consumer durables, industrial equipment, and consumer packaged goods industries. They wanted a crystal-ball forecast of Latin American markets because their export sales to these markets were tanking. The financial crisis had initiated capital flight out of emerging markets back to U.S. T-bills. LatAm currencies were down 30+% and several import customers in those countries were in dire straits. Furthermore, trade finance instruments were drying up. The CFOs around the table were unanimous in their policy decision to move A/P from net-30 days to anywhere from net-90 to net-180 days.

I decided then to cut short my forecasting presentation and spend 30 minutes instead preaching the virtues of thinking like a lender, not a manufacturer. The financial crisis gave the US corporate sector a small taste of what Latin America’s business sector faces year after year — a chronic shortage of capital. Latin Americans send an estimated 50% of their savings overseas ($5 trillion and rising), leaving their own banking systems short of deposits. As a result, capital is expensive in Latin America for anyone except national governments and a handful of AAA corporates. A mid-size ($10M – $100M sales) US company can access lines of credit today at 4%. The same size firm in Latin America, borrowing in dollars, pays 10 – 40% depending upon the jurisdiction. The gap between LatAm and US cost of credit was even more dramatic when I gave my talk in 2009.

Manufacturers who market their products go to great lengths to explain the features, quality, and functionality of their carefully crafted technology. While investing billions in marketing and selling, the same manufacturers are remarkably tightfisted when it comes to extending credit to their customers. In the US where customers also enjoy cheap access to credit, product quality, function and price are the deciding factors of product choice. In Latin America, and most emerging markets, credit terms are the most important purchase decision making factor, because working capital is so scarce. Not only is credit expensive, but for importers who must extend credit to their customers and put product into inefficient distribution channels, their working capital is stretched to the limit. With almost no working capital left over to source product, the supplier who provides credit will win their business. 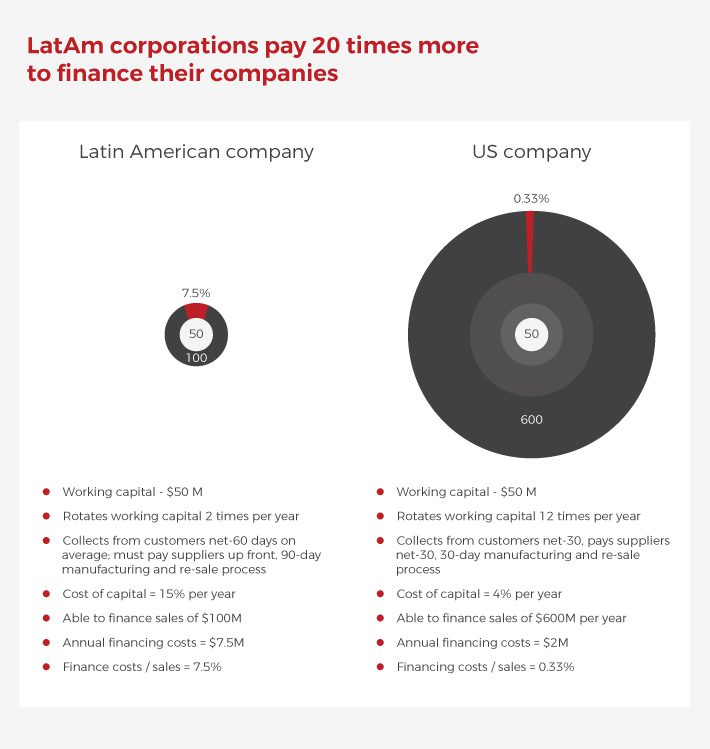 After sketching out the above to my audience of curious CFOs, they suddenly understood why their Latin American customers and suppliers can never pay on time.

I then shared with them what I had learned dealing with Grupo Carso, the corporate behemoth belonging to Carlos Slim, ranked at the time as one of the five wealthiest individuals in the world. Slim, like so many other billionaires in Latin America made their money playing the contrarian card, buying underpriced assets abandoned by retreating foreign investors and selling (often the same) assets to foreign investors when their market was hot again. Carlos Slim’s logic and strategy when it came to issuing credit is similarly contrarian.

A decade ago, when our firm was a supplier to one of Carlos Slim’s (more than 200) companies in Latin America, I learned that the payment of our invoices came with several choices.  If we wanted to be paid in local currency (Mexican pesos), then the terms were net-90 but we could be paid sooner, even within one week, if we were willing to stomach 2% per month discounting. In other words, getting paid in a week instead of 90 days would cost us around 5% discount on our invoice. If we chose to be paid in USD (as most foreign suppliers prefer), then payment terms were also net-90 but with a 4% discount from the start. Earlier than 90-day payment in dollars meant adding another 4% discount per month, while “early” payment would be discounted closer to 4% per month or a total of 15% discount for payment within one week. The Carlos Slim example was prescient for the CFOs in the room because it showed them how capital-rich firms in Latin America throw their weight around and turn a cost center (procurement) into a profit center while providing a lifeline to smaller vendors.

How Slim Used Credit to Create a New Market

Carlos Slim understands the power of capital on both sides of the accounting ledger. Back in the late 1990s, before cellular sales took off, and as Telmex was forced to compete for the domestic and international long-distance market segments, the company devised a clever ploy to leverage its functional monopoly in local telephony. At the time, Telmex had 15 million landline customers, who paid close to $400 USD to buy their line. Failure to pay your bill within 60 days led to line cancellation and the time and expense (another $400) to reinstall your line, possibly with a new number. Put in crude terms, Telmex had their customers by the short and curlies.

The late 90s saw the initial explosion of internet connectivity and home computer use in Mexico. The annual market for computers was roughly 1 million units per year in a country of 100 million inhabitants. To buy a computer and ISP service required either a lot of cash or a credit card, which less than 10% of Mexicans could claim. Telmex teamed up with Acer computers and Prodigy ISP and sold its landline customers a turn-key solution to home computing and internet connection. Customers were asked to pay about $60 per month for five years or $3,600 to purchase a computer worth no more than $800 and an internet service that cost Telmex a few dollars per month. The bundle seemed overpriced to anyone with a credit card but for most Telmex customers, it was the only realistic way to obtain a computer with ISP connectivity. The market gobbled up the concept and Mexicans were soon buying 2 million computers per year. Carlos Slim commanded 50% market share as the largest reseller of computers in Mexico, without taking one sale away from the competition — he used credit to create a market that did not exist previously.

In Latin America today, premium B2B brands from Europe, US and Japan in categories like construction equipment, mining equipment, manufacturing equipment, etc. struggle to compete with new Chinese brands which may be 50% less expensive. However, if a premium brand, which Latin American buyers would prefer to purchase, can be paid for via credit over a two-year period, then such a purchase is easier on their cash flow than paying for the Chinese brand up front. Few Chinese competitors have the same access to credit and working capital as legacy, premium-priced competitors. The more nimble, premium brands who have discovered the market-opening power of extending credit soon discover that they make more money charging interest on a 12-month line of credit (1-2% per month) than they make in product margins. It pays to think like a lender in a market that is starved for capital.

Contact us to find out more how our market and competitive intelligence services can help give you the edge you need to compete successfully in Latin America.