By Arthur Deakin
Posted May 6, 2022
In Energy
The Outlook for Biofuels and Electric Vehicles (EVs) in Latin America2022-05-062022-07-15https://americasmi.com/wp-content/uploads/2018/08/ami_logo_web_default_01.pngAmericas Market Intelligencehttps://americasmi.com/wp-content/uploads/2022/05/main_the-outlook-for-biofuels-and-electric-vehicles-evs-in-latin-america.jpg200px200px

Bill Gates recently suggested that switching to electric vehicles and alternative fuels (such as biofuels or electrofuels) will be the most effective way that the world can move toward zero emissions in the transportation sector. Unfortunately, Latin America is still struggling with high costs and unclear market frameworks to accelerate this transition. I presented AMI’s findings in the Latin America Energy Summit in Santiago, Chile on April 20, 2022.

The Prospects for Biofuels

Despite regulatory challenges, global biofuel demand is expected to skyrocket as the world moves towards net-zero. They emit less emissions than your conventional fuels and are receiving relatively large amounts of investments, bringing down costs. Biofuel demand will increase by at least 75% in the next five years, with a higher demand expected if more aggressive climate policies are adopted. Latin America will account for nearly 30% of global biofuel demand through 2026—mostly due to Brazil’s demand for biodiesel and ethanol.

In addition to the rate of adoption of net-zero policies, which includes biofuel programs and e-mobility laws, there are two main drivers that will impact the rate of biofuel growth. The first is how fast consumers will change their preferences for cleaner fuels and away from oil. British Petroleum, the 9th largest oil company in the world, expects oil to start declining somewhere between 2025 and 2030. McKinsey, a consultancy, expects it to happen sometime between 2024 and 2027.

The second factor is related to cost and limited feedstock supply, which is constricting demand. It still costs between U$70-130 per barrel of oil equivalent to produce conventional biofuels. The price is even higher for advanced ones. Regulatory changes are important, but countries also need to mobilize public and private investment to develop large-scale facilities to lower costs.

Not all biofuels will do well in LatAm. Renewable diesel and biojet are good investment opportunities in Europe and the U.S. because of their accelerated reduction of emissions and limited biofuels feedstocks. In fact, those two regions will account for 99% of all biojet demand growth through 2026 and 90% of renewable diesel demand growth.

But in Brazil, and in the wider region, ethanol and biodiesel will continue their dominance as the region has substantial domestic feedstocks, growing gasoline and diesel demand, and the intention to reduce fossil fuel imports. The slow adoption of EVs in Latin America will also keep demand high for biofuels.

News headlines show 100%+ growth in EVs in LatAm countries, but as seen in the table below, the data tells us a different story. EV sales as a % of total light vehicle sales in Latin America is negligible compared to other regions. In fact, only Colombia broke the 1% mark, while China and the European Union are already seeing double digit rates. There are two main reasons behind this:  first, EV sales are prohibitively expensive (except for the top 1%) and two, there is inadequate electric vehicle charging infrastructure (EVCI). This doesn’t mean that the long-term growth is not going to be exponential, but until there are more affordable vehicles, adoption will remain low in the region.

In the meantime, Latin America is struggling to find its footing within this energy crisis. While the U.S. has committed to doubling LNG shipments to the EU by 2030, Latin America is importing record amounts of U.S. LNG—in fact, U.S. imports doubled in 2021. The region is also dependent on 1MN barrels per day of U.S diesel imports, which have surged in price because of limited global supply and increased freight costs. This makes it a prime opportunity for Latin America to develop their own oil and gas reserves—which they have plenty of. There is Vaca Muerta in Argentina, the recent discovery in Bolivia made by Repsol (the Margarita 10 well), as well as the emerging frontier markets of Guyana and Suriname, that have an estimated 20 billion barrels of oil equivalent.

Investors still seem to care more about returns than the climate. But in the long-term, for Latin America to remain in the good graces of the global community, as well as align with climate goals, new fossil fuel developments need to start implementing carbon capture technology and strict controls of methane leaks. Without them, it’s possible they will find themselves ostracized within the next decade. 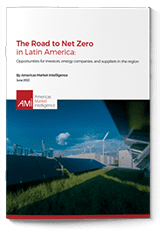 Contact us to find out more about how our market research and due diligence on electric vehicles and biofuels can help your company invest wisely, select the best local partners, and minimize risk in Latin American countries. We also invite you to explore our energy practice areas, and our analysis articles, which cover industry outlooks and discussions about the risks associated with the energy market in LatAm.